Atom 1.57.0
NEWS!
Megaleechers is not working in full these days. We will update the site less frequently. 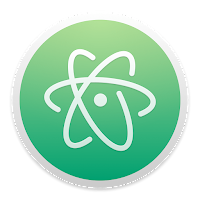 Atom is a full-featured, open source text and source code editor that's modern, approachable, yet hackable to the core - a tool you can customize to do anything but also use productively without ever touching a config file. It's composed of over 50 open-source packages that integrate around a minimal core. Atom is built using web technologies (HTML, JavaScript, CSS, and Node.js) and it runs on Electron (formerly known as Atom Shell), a framework for building cross-platform apps using Chromium and Node.js.

Atom's developers call it a "hackable text editor for the 21st Century. Like other desktop apps, it has its own icon in the dock, native menus and dialogs, and full access to the file system. Node.js support makes it trivial to access the file system, spawn subprocesses, and even start servers directly from within your editor. Need a library? Choose from over 50 thousand in Node's package repository. Need to call into C or C++? That's possible, too. Moreover, It can also be used as an integrated development environment (IDE).