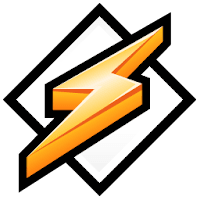 Winamp (Windows Advanced Multimedia Products) is a free, fast and flexible multimedia player for Windows. It's one of the most popular and industry leading software for handling audio CDs, MP3 audio files, and streaming audio broadcasts. Winamp also has access to thousands of free songs, videos and online radio stations from SHOUTcast Radio and AOL Radio with XM.

Winamp supports playback of many audio formats (MP3, OGG Vorbis, FLAC, AAC, WAV, MOD, XM, S3M, IT, MIDI, Windows Media Audio and Nullsoft Streaming Video, etc) and video types (AVI, ASF, MPEG, NSV, Windows Media Player. 5.1). The software has an extremely customizable media library and allows you to rip and burn your favorite music CDs. Moreover, Winamp is a skinnable player that has thousands of skins and plug-ins that allow you to change the look-and-feel of the player, as well as add new features.

Winamp was first published on April 21, 1997, by Nullsoft (four-person team, among them: Justin Frankel and Dmitry Boldyrev), when the "MP3" term was not so known and become popular over the years with 90 million users. discontinued in 2013, but it may "revive" in the near future. In June of 1999, AOL acquired Nullsoft for $80 million. In 2013, AOL announced that it'll shut down the popular Winamp media player and associated web services (Nullsoft brand) on December 20, 2013. That plan changed at the last second when Nullsoft was sold to Radionomy in 2014.

Radionomy relaunched "Winamp.com" and decided to release Winamp officially again to the world on October 18, 2018. The new 5.8 release of Winamp fix some bugs and compatibility issues, but the fully revamped version of the app, Winamp 6, should be released in 2019 (announced by Alexandre Saboundjan Radionomy's CEO On October 15, 2018). The last stable version of Winamp which was available for download on the official Winamp website was version 5.66.