Dolphin 5.0
NEWS!
Megaleechers is not working in full anymore. We will update the site less frequently. 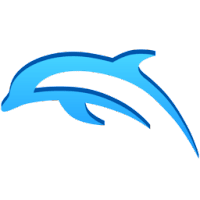 Dolphin is an open-source video game console emulator for the Nintendo GameCube and Wii with support for Microsoft Windows, Linux, Mac OS X, and Android. Dolphin was the first emulator to successfully run commercial GameCube game and later Wii games, and now boasts compatibility with most titles for those game systems.

Dolphin allows PC gamers to enjoy games for GameCube and Wii in full HD (1080p) with several enhancements: compatibility with all PC controllers, turbo speed, networked multiplayer, and even more.

What's New
Disclaimer: The direct download links we provided to you for this software are from the official author's website, therefore we can't guarantee safety, availability, or download speeds. We will look into all download options for your software: online installer, full offline installer (mostly exe or msi, and in rare cases - iso, or torrent), or portable edition (mostly zip, or rar). Moreover, we don't and we won't provide any pirated/illegal versions or tools. We recommend that you avoid using these methods as these methods can harm your device. If you like this software, buy it to support its developers.