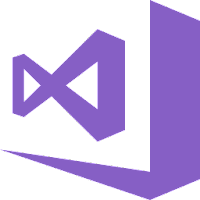 Visual Studio for Mac has everything you would expect from a modern IDE, including a full-featured source editor, code search and navigation, a powerful debugger, a customizable workspace, Git integration, and a rich extension system.

VS 2017 for Mac allows you to develop apps for Android, macOS, iOS, tvOS, watchOS, web, and cloud. With support for ASP.NET Core, you are empowered to create beautiful, modern web applications. Craft the front-end with the same web editor experience you know and love from Visual Studio and Windows and publish to the cloud directly from the IDE.

Visual Studio 2019 for Mac is available in three editions:

Release Notes for 2017 / Release Notes for 2019
Disclaimer: The direct download links we provided to you for Visual Studio for Mac 2019 (8.0.5.9) / 2017 (7.8.3.2) are from the official author's website, therefore we can't guarantee safety, availability or download speed. We try to find all download options for your software: online, full offline installer (mostly exe or msi, and in rare cases - iso, or torrent), or portable edition (mostly zip, or rar). Moreover, we don't and we won't provide any pirated/illegal versions or tools. We recommend that you avoid it as these methods can harm your device. If you like the software, buy it to support the developers.