Microsoft Edge 92.0.902.67
NEWS!
Beside offering software updates news and downloads, Megaleechers will also help you to save money with software deals! 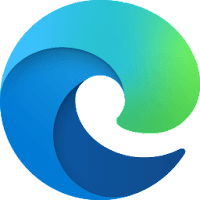 Microsoft Edge is the official web browser of Microsoft that is bundled by default on Windows 10 PCs. It's designed to make your browsing experience fast, secure, stable, and more productive. The browser aims to deliver a controlled and managed browsing experience with great performance. It was first released in 2015 for Windows 10 PCs and over the years added supported for Mac OS X, Android, and iOS. It will let you sync all your browser data across the different platforms fast and easily.

Microsoft Edge was built to replace the old popular Microsoft's web browser Internet Explorer. Originally, it was built with Microsoft's browser engine "EdgeHTML" and their "Chakra JavaScript engine" (the old browser version called Microsoft Edge Legacy), but since January 2020, the browser has been rebuilt/reborn and now is based on the Chromium open-source project and offers a new look and powerful features (it's now named the "New Edge Browser"). Chromium project is based on an engine called "Blink", and is used by major other browsers like Google Chrome.

Microsoft's Chromium Edge Browser allows you to surf the web without worrying about your privacy. It is designed to detect and block known trackers that sniff your browsing behavior and let you control which ones you want to allow or block. Simply prevent unauthorized access to your browsing info, keeping you safe and relaxed. Furthermore, the browser supports InPrivate tabs where your browsing info (like cookies and history) is not saved. Moreover, The new Chromium-based version of Microsoft Edge comes packed with Microsoft Defender SmartScreen, a security feature that protects you from phishing and malware websites and checks your downloads for malware. The browser support extensions from both Microsoft Add-on Store and Google Web Store (as it is built with the Chromium engine). It also features an "IE Mode" - that allows support for old web pages by rendering them with the old Internet Explorer render engine "EdgeHTML".

Note: If you can 't open Microsoft Catalog in your browser, simply try another one.